Turks and Caicos Cuisine Restaurants
Jerk chicken, peas and rice, and slaw from Hole in the Wall Restaurant.

As was also the case with most destinations in the Caribbean, our local dishes and flavors have evolved from the necessities and way of life of bygone times.

Local cuisine in the Turks and Caicos has traditionally centered around fish, lobster and conch caught in the islands, complemented by locally grown and imported grains, cereals and produce.

As tourism has increased to the islands, local flavors have been overshadowed by international cuisines at many of the restaurants in the main tourism district of Grace Bay, yet it’s still possible to find some of the long-standing and popular Turks and Caicos dishes such as fish with peas n’ rice and fish stews at some of the establishments in the Downtown, Blue Hills and Five Cays settlements.

As a tropical archipelago nation, seafood of course was and still is the center of many of our authentic dishes.

Fish, including grouper, snapper, jacks and tunas are some of the top catches, and would be pan-poached, fried, and made into stews.

The giant conch sea snail is another seafood favorite and factors into the country’s best dishes. Conch also had the advantage of being able to be easily preserved by drying in the sun, and consequently was carried in conjunction with corn bread “journey cake” and as provisions on fishing and trade boats.

The spiny lobster was appreciated just as much in the past as it is today. In the past and in northern regions, the red lobsters of the colder Atlantic water were considered to be undesirable seafood, and were thus collected by the poor. In the tropical Atlantic islands, there isn’t evidence of such a preference, perhaps because lobsters offered a welcome change from a fish centric diet.

Due to the limited fresh water and soil in the Turks and Caicos, it has always been difficult to raise crops here. Several varieties of drought and pest resistant plants such as types of maize, okra, beans, squash, papaya and plantains saw greater success and were the favored choices.

Paired with fish or conch, peas and grits was the favored side dish in the past, and was made from locally grown pigeon peas and maize, which was hand ground. As time passed, trade with other countries increased, and imported rice gradually replaced the maize. Today, peas n’ rice is by far the most common compliment to local seafood dishes.

Trade between the Turks and Caicos archipelago and the island of Hispaniola has existed since the days of the Taino aborigine peoples, and it’s surprising how similar the dynamics were over several centuries. The people in the islands have changed over time, yet collected sea salt, dried fish and conch would still be exchanged for produce from the greener island of Hispaniola. The Taino’s giant dugout canoes conceded to the Caicos Sloops, yet the same driving force continued.

Much of the country’s produce is now imported from the United States, yet trade with the Dominican Republic and Haiti still occurs, and this is reflected in some local supermarkets where plantains, guava, salt fish, sugar cane, and sugar apples are offered.

After the collapse of the sea salt industry and sisal plantations, the Turks and Caicos lost much if its national income, and consequently saw significant population migration to neighboring countries such as the Bahamas and Jamaica.

After the advent of the tourism industry in the Turks and Caicos in the 1980s and 1990s, the emigrants from the country began to return, and they brought regional flavors and recipes with them.

Two such examples are fried conch fritters and conch salad, which have a heavy Bahamian influence. On the spicier side, many versions of jerk chicken, fish, and pork dishes were introduced from Jamaica.

As the luxury tourism market has increased in the Turks and Caicos, it has attracted talented chefs from around the world. There’s a tremendous selection of fine dining restaurants to choose from, and many of these establishments offer dishes inspired by our island’s food classics. 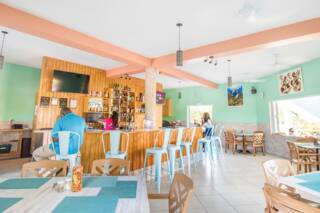 $20
$19
Mr. Grouper's
73 Sibonne Road, Kingston
Mr. Grouper's is a seafood and island cuisine restaurant, located on Providenciales in the Bight community, and near Grace Bay. The restaurant serves a wide range of fish, lobster, and conch dishes, as well as sandwiches, burgers, salads, and more.
Lunch and Dinner
Seafood + More
Dinner for Two
$48 - 140
Learn More
Prices shown are inclusive of tax. Gratuity is not included and is appreciated by staff. This venue charges Service Charge (11%) and Government Tourism Tax (12%). 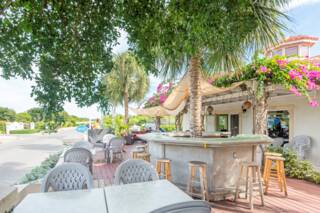 $15
$18
Simone's Bar and Grill
107 Lower Bight Road
Simone's Bar and Grill is a Turks and Caicos and Caribbean cuisine restaurant located in Turtle Cove in central Providenciales. Enjoy fresh conch, fish, and lobster dishes in a casual and comfortable environment.
Real Local Fish
Lunch and Dinner
Bar and Grill + More
Dinner for Two
$54 - 115
Learn More
Prices shown are inclusive of tax. Gratuity is not included and is appreciated by staff. This venue charges Government Tourism Tax (12%). 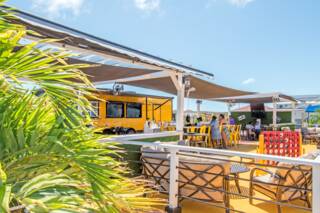 $44
$32
Bugaloo’s Conch Crawl
Bugaloo’s Conch Crawl is one of the best-known restaurants in the Turks and Caicos. Located on picturesque Five Cays Beach, the restaurants features seafood and conch dishes, a great location, live music, and dining in a coconut grove, on the beach, and in the ocean.
Lunch and Dinner
Seafood + More
Dinner for Two
$58 - 140
Learn More
Prices shown are inclusive of tax. Gratuity is not included and is appreciated by staff. This venue charges Service Charge (15%) and Government Tourism Tax (12%).

$20
$13
Omar’s Beach Hut
Fisheries Row
Omar’s Beach Hut is a popular beachfront Jamaican and Island Cuisine restaurant, and is located at the turquoise waters of Five Cays Beach. The restaurant specializes in fresh seafood, including fish, conch, and lobster.
Lunch and Dinner
Caribbean Cuisine + More
Dinner for Two
$44 - 128
Learn More
Prices shown are inclusive of tax. Gratuity is not included and is appreciated by staff. This venue charges Government Tourism Tax (12%).