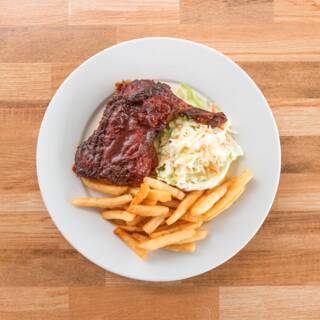 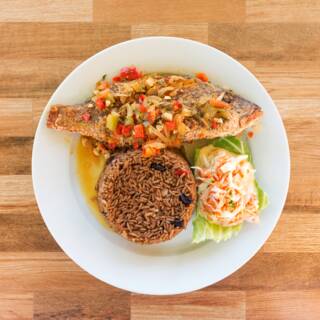 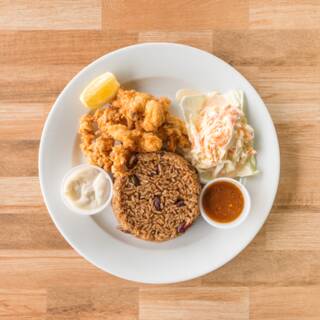 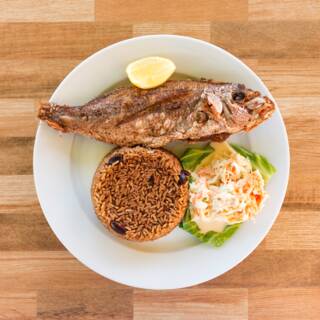 $20
Fried Snapper
Lunch and Dinner
Steamed Snapper
$20
Fried Snapper
$20
BBQ Chicken
$12
Conch Fritters
$20
This venue does not charge any taxes. Gratuity is optional and is appreciated by staff.
Editor's Comments
Mangrove Bay Restaurant isn't located at the most scenic area of Providenciales, yet it does serve some of the best local snapper, grouper, and conch in the Turks and Caicos, at prices much lower than found at better-known restaurants. The steamed whole snapper or grouper fillet is excellent.
Steamed grouper, peas n' rice, and coleslaw at Mangrove Bay Restaurant.

Mangrove Bay Restaurant is an often-overlooked Turks and Caicos cuisine eatery that’s located on the water at Cheshire Hall Creek near Downtown and Discovery Bay. This establishment is named after the lush mangroves growing in the adjacent creek, and serves some of the best examples in the country of quintessential local dishes such as fish and peas n’ rice, and conch salad.

The menu at Mangrove Bay Restaurant includes whole local snapper which may be fried, steamed, grilled, or blackened, and completed with sides that may include peas n’ rice, white rice, potato salad, mac n’ cheese, fried plantains, coleslaw, French fries, johnny cake (cornbread), and other options at times. Grouper isn’t served as often as snapper, yet is sometimes offered, and prepared in much the same ways as the snapper.

Conch dishes include conch fritters, conch salad, conch stew, and cracked conch. Lobster, when in season, is also usually on the menu, as whole grilled tails, minced, or in a salad. Great blue land crab, typically from North Caicos, is also occasionally an option.

BBQ and jerk chicken, souse (chicken or pork and vegetables in broth), curry, burgers, sandwiches, BBQ ribs, smoke pork and fried chicken strips are also on the menu and great, yet it’s a shame to miss out on the fresh seafood.

Mangrove Bay only uses fresh local seafood (other than the fried fish fingers), so the complete menu may not always be available at all times. The restaurant has much better rates and doesn’t try to sneak imported seafood into dishes (which can’t be said for some well-known restaurants on the island), which, combined with the waterfront setting, make it a much underappreciated dining spot.

Takeout is available for most dishes.

Mangrove Bay Restaurant features both indoor and al fresco seating. The outdoor seating is located on the water at picturesque Cheshire Hall Creek, which is line by verdant red mangroves. A refreshing breeze is typically always blowing in from the Caicos Banks. The spot is located to the east of the runway of the Providenciales International Airport, and it’s interesting to see the occasional aircraft taking off.

The restaurant has a dart board and pool table onsite, for those looking for some entertainment.