Local Businesses
The beautiful ocean in the Turks and Caicos. Photo by Tropics TCI Art.

One unique way to memorialize your visit to the Turks and Caicos is to have a clear kayak photo shoot, which will get you some incredible and special photos that are perfect for social media or prints. Videography is also available, with the end product possibly being either short video clips or edited videos, according to customer wishes.

Some companies also provide underwater photography in addition to the drone shots, and over under shots, which are photos that are split by the water’s surface, and show subjects below and above the water.

Clear or glass bottom kayaks have become very popular in the Turks and Caicos for eco tours, as they provide an opportunity to view the fascinating wildlife under the water’s surface. The sightings of course vary according to the location. In the mangrove wetlands and estuaries, conch, turtles, starfish, baby sharks, stingrays and small fish are common, and on the shallow reefs there’s coral and sea fans, bright and colorful fish, and maybe even some of the larger marine creatures, such as sharks!

Several companies provide guided tours via clear kayaks, and some can add on photo shoots onto excursions. However, several companies specialize in simply during clear kayak photo sessions, and are set up to create great photos, at a convenient location that’s chosen according to the day’s weather and ocean conditions.

Above: There are several amazing spots to take photos at, including Grace Bay Beach and Leeward Beach.   Top right:  Top left:  A mermaid underwater photoshoot with Free Dive With Me.   Bottom right:  Top right:  Clear kayak photos shoots can be great for a variety of occasions. Photo by Island Adventure TCI.

An over under photoshoot with Fly TCI.

An excellent aspect about beach and coastal photography in the Turks and Caicos and on the island of Providenciales is the wealth of beautiful locations for photography. Clear kayak shots especially look stunning when there’s a combination of clear and shallow turquoise water, and defined sand patterns on the ocean floor, which are created by the natural movement of the water and waves.

Several great spots stand out on Providenciales, including Leeward Beach, Grace Bay Beach, the The Bight Beach, Long Bay Beach, Sapodilla Bay Beach, and Taylor Bay Beach. Some more great spots are Half Moon Bay Lagoon, Sand Dollar Cove, and Fort George Cay, which are a short boat hop away from Provo. Weather conditions definitely need to be considered when choosing a spot, as if it’s a bit too windy or wavy, the appearance of the water won’t be optimal.

It’s often best to rely on the advice of your photographer when deciding on locations, as they’ll typically be more in-tune with the weather and ocean conditions. However, always suggest locations that appeal to you. 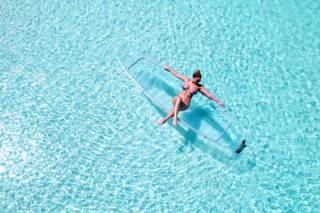 Turks Ventures
Turks Ventures is a small eco-tour, water sports, and boat charter based on Providenciales, with a focus on fun and interesting tours many beautiful locations in the Turks and Caicos. Excursions include an economical water taxi service to Half Moon Bay, Little Water Cay, and the floating bars.
Learn More 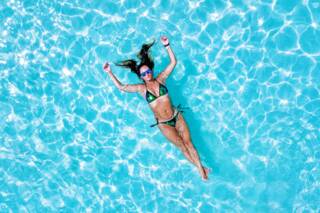 Tropic TCI Art
Tropics TCI Art is a unique photography and videography company based on Providenciales that specializes in drone and aquatic photo shoots, including drone clear kayak shoots in our spectacular turquoise water, and underwater and over under shots. While great memories can’t be duplicated, they can be frozen in time forever. Don’t leave without that timeless record.
Learn More