The island of Providenciales features a great selection of ice cream parlors and other sweets shops, which are able to satisfy any sweet tooth.

The traditional cuisine of the Turks and Caicos doesn’t have as broad a selection of dessert and sweet treats, which was primarily due to the expense and difficulty of importing or producing sugar or other sweet goods. Some crops, including sugar cane, sugar apples, papaya, mangos, and guineps were raised in limited quantities, and provided a welcome complement to the staples of seafood, rice, beans, maize, salt meat, and plantains. Caramel made with the excellent Salt Cay salt, Bambarra Rum cake, and semi-baked sweet fruit cake are some of the few desserts that have a close connection to our islands.

The larger supermarkets on Providenciales, which include Graceway IGA and Graceway Gourmet, stock a wide collection of imported ice cream, candy, and chocolates. Some of the gift shops in the Grace Bay area, such as Flowers by EA, also stock gourmet chocolates suitable for Valentine’s Day and other special occasions.

The local shops that make their own ice cream often create varying and unique flavors.

Freshly made ice cream, gelato, and sorbet can be found at several shops and restaurants on Providenciales. At local ice cream shops, the quintessential chocolate and vanilla are typically available, yet the other flavors created often vary due to the season and availability of ingredients.

Island Scoop is one of the best-known ice cream shops in Grace Bay, and has a quaint location at Grace Bay Plaza near the Saltmills and Regent Village. On the impressive menu is a full complement of ice creams and sorbets which are made in-house and can be served in cones, cups, or as sundaes. There’s also breakfast options, smoothies, milkshakes, and coconut drinks.

The Patty Place, a Jamaican-inspired confectionery that has two locations, sells Devon House ice cream of Kingston, Jamaica fame and locally made ice cream cones and patty pastries, which are a flat pastry with a flaky pie-like crust that may be filled either with savory meat, or sweet fillings.

Giggles is a small ice cream parlor, located at Ports of Call Plaza in central Grace Bay. The shop features homemade ice cream and a collection of candy, sold both individually wrapped and by the pound.

Another icy dessert option is fresh frozen yogurt. Turk Berry, located at the Saltmills Plaza in central Grace Bay, serves several base flavors of frozen yogurt, which can be topped with their wide menu of toppings, which includes fresh fruit, sprinkles, chocolate, and much more. Turk Berry also serves coffee and donuts.

In Turtle Cove, Jammin’ Gelato serves a wide selection of gluten and egg free gelato and sorbet in fruit and regional dessert flavors. The proprietor often makes the trek with an ice cream cart up to the Bight Reef area, so you can enjoy this treat on the beach as well.

Providenciales has a number of bakeries that produce fresh cookies, cakes, Danishes, pastries, and other sweet bakes goods. Graceway Gourmet and Graceway IGA both maintain large bakery sections, and smaller establishments such as Caicos Bakery and the cafés in Grace Bay also have some delicious and fresh-baked treats. 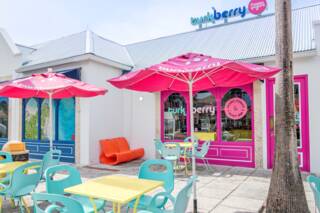 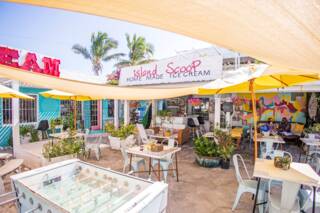 Island Scoop Ice Cream Parlor
Island Scoop serves freshly-made and unique ice cream and sorbet, along with smoothies and coffee. Located within walking distance of many of the Grace Bay resorts.
Learn More 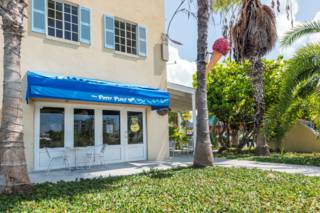