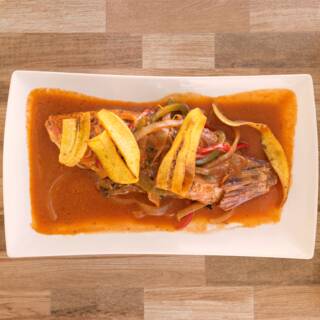 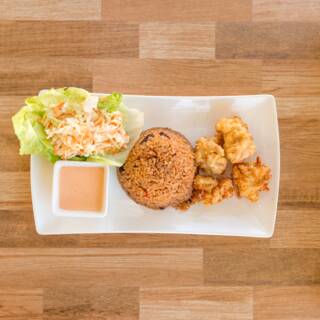 Bugaloo’s is a popular restaurant that’s located on the turquoise waters of Five Cays Beach. The establishment serves a wide array of local, Caribbean, and seafood dishes, and often has live music and entertainment in the evenings. One well-known favorite drink is their rum punch, and over time they’ve evolved into a tourist attraction, with live entertainment at times. Bugaloo’s is one of only a very few restaurants on Providenciales that actually has some tables on the beach and in the ocean. The atmosphere is the main advantage of Bugaloo's, with their outdoor dining under coconut trees overlooking the sea.

Bugaloo’s is open for lunch and dinner (not breakfast), and also has a popular wine and rum bar. Their menu is heavily influenced by Turks and Caicos and Caribbean cuisines, with many conch dishes and local fish such as red snapper.

Opened in 1994, in the past Bugaloo’s used to be located on Blue Hills Beach, yet later made the move to Five Cays.

Local musician and Reggae artist Stanley Roots is often playing at Bugaloo’s, typically during the day.

The name Bugaloo is derived from the man who started the initial restaurant in Blue Hills: Berlie “Bugaloo” Williams.

Berlie Williams, originally from North Caicos, started Bugaloo’s as a small shack on Blue Hills Beach in 1994, and from the start it was very popular, as it was a rather unique dining spot and place to hang out, when Providenciales didn’t have many restaurants. Berlie left North Caicos and moved to Eight Mile Rock on Grand Bahama Island in the Bahamas when he was 16, and got a job with the restaurant and hospitality industry, where he gained the knowledge and experience needed to create and run Bugaloo’s.

Later, Berlie Williams returned and partnered with Michael Stolow to open what is now the current location at Five Cays Beach. The old Bugaloo’s site became Da Conch Shack, a likewise busy seafood restaurant. Berlie “Bugaloo” Williams is no longer involved in the restaurant that still bears his name.

The term Conch Crawl refers to a type net or rock fence enclosure feature that for centuries has been used in the islands to corral live conch until needed. Fisherman would bring in live conch in their shells, and simply drop them in the underwater pen. There’s even evidence and remaining features that show that the pre-Columbian Lucayan peoples, who once inhabited the Turks and Caicos, used rock conch crawls.

See Also Five Cays Beach
A conch knocking demonstration at Bugaloo's Conch Crawl Restaurant. Conch knocking is the process of removing the conch from its shell.

Five Cays Beach, which fronts Bugaloo’s and Omar’s Beach Hut restaurant, offers calm and shallow water, which can be impressively turquoise hues further out. Bugaloo’s has a few tables and chairs in the very shallow water that fronts the restaurant, which makes for a unique dining experience.

The coastal area can be quite interesting. Small fishing boats can be seen coming and going, horseback riding takes place on the beach to the north, and kids are often playing in the ocean.

Bugaloo’s is located in the traditional community of Five Cays. This area is generally home to lower-income residences, small shops, and a small fishing port.

To get to Bugaloo’s follow South Dock Road from the Downtown area and take a left onto the main road into Five Cays (there’s a large sign at the entrance). Continue on Five Cays Road for one mile (1.6 km), and take a left turn onto the wide unpaved road (there’s a sign for Bugaloo’s, Omar’s Restaurant, and Five Cays Water Sports). After a short distance, Bugaloo’s will be on your left.

The beautiful and calm Five Cays Beach at Bugaloo's Restaurant.

Fronting one of the three original settlements on Providenciales, the expansive bay here supports a long beach with shallow water. Abandoned dead conch shells and the occasional piece of junk equipment detract from what would otherwise be a decent beach. More about Five Cays Beach →