Sea scooters, which are also known as underwater scooters, or diver propulsion vehicles (DPVs), are small battery powered submersible motorized tugs which can tow snorkelers and swimmers at speeds of 2-4 mph (3-6 km/h).

Underwater scooters are very easy-to-use, both on the water’s surface and below. It typically takes only a few minutes of practice to become comfortable in the water. Users have two handles to hang on to, and a simple throttle trigger turns on the device and controls speed. Users wear regular snorkel masks and fins.

Many of the popular underwater scooters are made by the long-standing and well-known small water craft manufacturers such as Yamaha and Sea-Doo. Most of the crafts tend to either be intended for casual snorkeling use, with a maximum depth of 50-65 feet (15-18 m), or scuba diving models, with far greater maximum operating depths of 300-400 feet (90-120 m). As may be expected, the units intended for snorkeling tend to be much smaller and lighter than those designed for scuba diving. Battery life varies greatly by the exact model of scooter, yet most offer 30-60 minutes of typical usage before requiring recharging.

For the beautiful snorkeling locations of the Bight Reef and Smith’s Reef, a sea scooter can allow a snorkeler to have a less strenuous way to explore the complexities of the reef system, and spot more of the interesting sea creatures that make those locations such amazing snorkeling locations.

Some snorkeling boat excursion and tour companies also provide sea scooters for their guests. These trips tend to visit snorkeling reefs such as the exquisite Leeward Reef, which is part of the barrier reef system in the Princess Alexandra National Park.

The beautiful Smith's Reef beach snorkeling site. Sea scooter rentals are available at both Smith's Reef and the Bight Reef.

On Providenciales, sea scooter rentals are offered on the beach at a few locations.

Sea scooter rentals are also available at most times at the popular Bight Reef (also known as Coral Gardens) snorkeling site, and at the central Smith’s Reef access.

Some of the boutique boat charter companies also include sea scooters as part of their vessel’s amenities.

Don’t Rely on the Sea Scooter

One of the most important considerations when using a sea scooter is to never be in the position where you rely on the sea scooter to return to shore or stay above the water’s surface.

Like all mechanical devices, sea scooters can fail, the batteries may be exhausted, or you can simply lose control of the device. Users must be able to get back to shore or their vessel simply by swimming on their own.

Be Aware of Currents and Ocean Conditions

When in the ocean, all areas typically have at least a little water or wind movement that will cause persons and vessels to drift. On calm days and at sheltered locations this effect may not be too great, yet can be significant at other locations and weather conditions.

It’s important that persons on and in the water maintain awareness of their surroundings. It’s easy to get deceived about a person’s or vessel speed capability when traveling with the current. The return trip against the current can be an unpleasant surprise, when it proves to be much more difficult and slow. 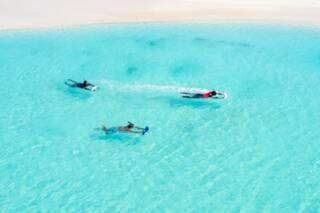