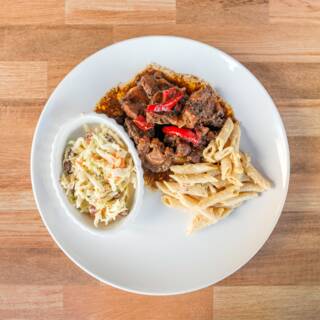 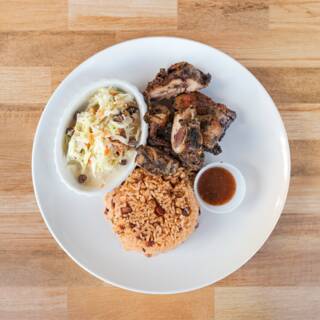 Want some authentic Jamaican cuisine? Hole in the Wall Restaurant in Downtown Providenciales serves some of the best examples of Jamaican food in the Turks and Caicos, as well as many regional Caribbean dishes.

Hole in the Wall is located in Downtown on Old Airport Road. Indoor and outdoor seating is available. The restaurant is open for lunch and dinner, typically seven days per week.

Hole in the Wall is well-known for their jerked dishes, including jerk chicken, jerk pork, and jerk fish. Jerk dishes are typically marinated, spicy, and slow cooked, and the restaurant serves really good examples of the style.

Another regional and local favorite is ox tail, and Hole in the Wall is famous for their representation of the dish. Curried and stewed chicken or goat are also popular.

BBQ is another common Turks and Caicos island cuisine fare. Choose from chicken and ribs, slow cooked with a sweet BBQ sauce.

Locally caught seafood is also often available at Hole in the Wall. Options are usually whole fish that may be fried, steamed, curried, sweet and sour, or Jamaican Escovitch, which is fried fish that’s topped with spicy sauce and vegetables. Shrimp (imported) is available in several styles as well. Conch fritters and cracked conch is usually also on the menu.

Available drinks include wines, spirits, and local and imported beers, including of course the quintessential Jamaican Red Strip, and Turks and Caicos Turk's Head.

Downtown is located in central Providenciales and close to the airport. Several of the Government offices, the Post Office, many small restaurants and shops, and the Gustarvus Lightbourne Sports Center can be found here. Although one of the busiest areas on the island, building density tends to be low and sporadic. More about Downtown →