There's So Much to Explore by Jet Ski!

The Turks and Caicos is an amazing place to explore via jet ski!

The Turks and Caicos is an incredible destination for water sports, which certainly includes jets skis. Both hourly jet ski rentals and guided tours are available on the island of Providenciales (home to world-famous Grace Bay Beach), and the island of Grand Turk (location of the only cruise ship port in the country).

Our less populated islands of North Caicos, Middle Caicos, South Caicos, and Salt Cay currently do not have any jet ski rental or tour businesses.

Providenciales is the best place to be in the Turks and Caicos for jet skiing, due to the wide range of rental companies, and the countless cays, beaches, and amazing coastlines to explore.

The waters around our archipelago can be challenging to navigate, so the best way for most to jet ski in the Turks and Caicos is to take an organized tour with a guide, which will maximize the experience and ensure that you’ll be able to find some of the hidden gems out on the water!

Exploring the south coast of Providenciales by jet ski.

In the Turks and Caicos, jet skis are either rented from a marina or waterfront business location, or from vendors that operate from temporary locations on the beach.

Rental fleets typically include a range of jet skis, with a blend of basic and performance models. Yamaha Waverunners tend to be the most common variety, yet some Sea-Doo and Kawasaki variants can be found as well.

Experienced jet skiers will likely prefer opting for the high performance skis such as the Yamaha Supercharged FX models, as many of the basic rentals top out at about under 40 mph (64 km/h).

Guide tours are not as common on Grand Turk, as most visitors simply opt for hourly rentals in the waters south of the Grand Turk Cruise Center.

A great part about jet skiing in the Turks and Caicos is that there are many beautiful and interesting places to visit, so you’ll have much more to do than simply race on the water.

The iconic La Famille Express in the shallow waters off Long Bay Beach is a very popular destination for jet skis and boat charters alike. This old Soviet freighter was grounded in very shallow water during a hurricane years ago.

A short distance off Five Cays Beach is the small and beautiful uninhabited Bay Cay. This little island hides a small and sheltered beach and a population of friendly Turks and Caicos Islands rock iguanas, which greet arriving guests.

West Harbour Bluff is a remote coastal area is located on the far south-western point of Providenciales, and features a small cave, the tallest sea cliffs on Providenciales, a sheltered beach, historical rock carvings, and a menagerie of wildlife to spot.

These two small and calm beaches are found near Chalk Sound on Providenciales, and are a spectacular stop when touring the southwest coast of Providenciales. Sapodilla Bay can get very busy, yet the more extensive Taylor Bay typically is quiet.

When the weather’s calm, another great south coast location near Providenciales is the small Turtle Rock. This is essentially a little uninhabited limestone cay that split in half, and is a very interesting place to snorkel.

When the weather’s good, a great place to visit by jet ski from Grand Turk is Gibb’s Cay. Due to the distance, it’s best to only attempt this with a guide. This tiny uninhabited cay offers an exquisite beach, where dozens of stingrays can be seen.

Restrictions on Jet Ski Use

In the Turks and Caicos, jet ski use in National Parks and Nature Reserves is prohibited.

The Turks and Caicos has several extensive marine protected areas where jet skis may not be used, which include many of the best-known beaches in the country. On Providenciales, the Princess Alexandra National Park includes world-famous Grace Bay Beach, the Bight Beach, and Leeward Beach. 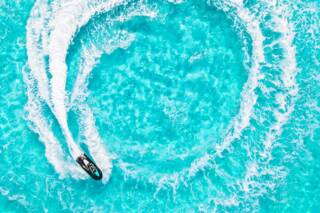 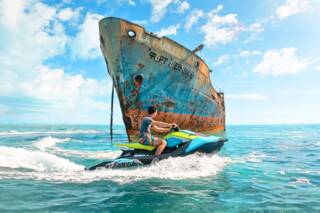 Five Cays Water Sports
Five Cays Water Sports offers jet ski tours from directly off the beach at Five Cays, with a location near the popular Bugaloo’s Restaurant and Omar’s Restaurant. Tours include are led by knowledgeable guides, and visit some of the best west coast sights and attractions, including the Pirate’s Cove and West Harbour Bluff, the iguana habitat of Bay Cay, secluded beaches, and much more.
Learn More 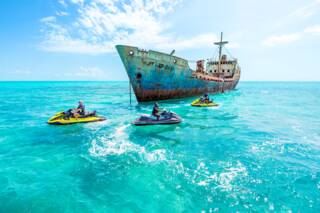 Caribbean Cruisin'
Located at Heaving Down rock Marina on the east end of Providenciales, Caribbean Cruisin' is the primary passenger ferry service operator in the country, with routes from Providenciales to North and South Caicos. They also provide jet ski rentals and tours, boat charters and excursion, and water sports.
Learn More