Local Businesses
Editor's Comments
South Caicos is a great location for the adventurous snorkeler. If you’re willing to explore the island’s varied coastlines, you’ll typically be rewarded with unrivaled wildlife sightings. For beginners, it’s best to take a guided boat charter.
5-star rating for Snorkeling by Visit Turks and Caicos Islands
Snorkeling at a shipwreck in Bell Sound near South Caicos.

South Caicos is an amazing destination for the outdoors, and especially for the water sports of fishing, scuba diving, kayaking, and snorkeling.

Due to the island’s location on the eastern edge of the Caicos Banks and Caicos Island archipelago, the surrounding waters are a mixing ground for many marine environments, and are consequently a haven for wildlife. The shallows, red mangrove wetlands, sandy channels between the cays, the barrier reef, and the depths of the Turks Islands Passage collectively create a spectacular range of underwater settings.

South Caicos tends to be exposed to the consistent eastern trade winds and swell of the open ocean more than many of the other islands in the Turks and Caicos. Because of this, the best snorkeling is typically had at sheltered locations on the lee side of the land.

Usually, wind speeds under 10 mph (16 km/h) in conjunction with low or no ocean swells are most conducive to pleasant snorkeling.

Reef Safe Sunscreen: Please use reef safe sunscreen when in the Turks and Caicos. Common types of sunscreen that contain oxybenzone and octinoxate cause lasting and significant damage to corals and reefs.
School of blue tangs on the reef.

East Bay is one of the more extensive beaches on South Caicos, and interesting snorkeling can be had in the seagrass beds fronting the coast, and along the rocky coasts that fringe the western and eastern sides of the beach.

East Bay is easily accessible, yet is a little more susceptible to wind and choppy ocean conditions than some of the other beach snorkeling sites. Starfish, turtles, conch, and small sharks can be seen in the area.

Jerry Camp, a water access near Plandon Cay Cut, is a unique snorkeling location on the far northern peninsula of South Caicos. This wetland sound location doesn’t offer much in the way of coral and reefs, yet is an excellent spot for seeing larger sea creatures such as nurse sharks and lemon sharks, southern brown stingrays, eagle rays, turtles, and shallows and channel fish such as barracuda, bonefish, snappers, jacks, and permit.

This landing and water access is a natural funnel point for wildlife traveling between the islands, and the area has been utilized by fisherman since before the arrival of Columbus in the New World.

The area to the north of Jerry Camp is Plandon Cay Cut, one of the most beautiful vistas in the Turks and Caicos.

The best section of reef is found at the far southeastern point of the beach and South Caicos.

The best way to snorkel at South Caicos is to take a snorkeling charter with a knowledgeable captain. There are countless reefs surrounding the island that are too far out to swim to, yet typically offer vibrant coral and great underwater visibility.

Long Cay is an exquisite national park island near Cockburn Harbour on South Caicos. As its name suggests, the island is very long at over 3 miles (5 km), yet is very narrow. The eastern and western sides of the cay are quite contrasting, with the deep blue of the Turks Island Passage on one side, and the shallow turquoise of the Caicos Banks on the other.

The best snorkeling at Long Cay can be found at either the northern or southern ends of the cay.

Long Cay offer much more than just snorkeling. Incredible beaches with breathtaking turquoise water line the western side of the cay, and inland, the critically endangered Turks and Caicos Islands Rock Iguana can be seen.

The tiny rock island of Dove Cay is located quite close South Caicos and is another great snorkeling site. Due to the cay’s location in the channel between South Caicos and Long Cay, there’s a good chance of spotting larger sea life such as eagle rays, turtles, and sharks. Water visibility here is typically amazing. 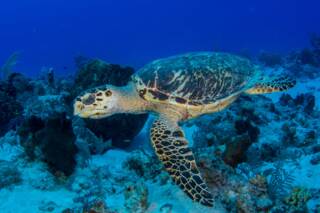