Local Businesses
Editor's Comments
Subwinging is one of the lesser-known water sports in the Turks and Caicos, yet it’s an amazing experience and lots of fun. It’s a great activity for those who have already spent time snorkelling and are looking for something new to try.
5 star rating for Subwing Tours by Visit Turks and Caicos Islands
The subwing is easy to use and tremendous fun.

Subwinging is a really fun water sport that’s suitable for snorkelers that are comfortable in the water. Basically, the activity consists of a rider being dragged at slow speed underwater behind a boat while holding onto a small winged board. The wings can swivel in the center, allowing the rider to dive up and down, spin, and steer from side to side.

The water sport is a lot of fun, and is a great way to see wide swatches of the reef systems and underwater geology.

Typically, a simple snorkel mask is the only equipment used in addition to the subwing. A snorkel tube and fins are usually not used, as they are unnecessary and just create extra drag and resistance underwater. A rider rises to the surface for air, and then dives down for as long as is comfortable.

Subwinging is generally suitable for most ages, and after a bit of practice, most skill levels of snorkelers and swimmers. It’s possible to arrange dedicated charters solely to subwing, yet often it’s an activity on some of the smaller private charter trips. It’s possible to tow two subwings at the same time, allowing for tandem riders.

The concept and method of subwinging is very easy to learn. The tow speed is typically quite slow at about 2-4 knots, which is about a fast walking speed. It seems much faster when underwater with the water rushing by!

Equalising when diving down is usually the most difficult aspect to master. As one increases in depth, water pressure likewise increases, which can be felt in the diver’s ears. The difficulty in equalizing varies from person to person, Equalizing while subwinging is done in much the same way as with snorkeling and scuba diving. Subwings have a rope handle at the rear of the board, so divers can hold on with one hand while they equalize, if needed.

The tow boat will have a captain running the boat, and typically a spotter watching the subwingers. Riders are able to simply let go of the subwing in the case of any difficulties.

Subwing tour at the reef in the Turks and Caicos with Talbot's Adventures.

The Turks and Caicos is an exceptional destination for snorkeling and scuba diving, and the same goes for subwinging.

The barrier reef that fronts Grace Bay and the Caicos Cays is one of the best places to subwing, as there are miles of beautiful fringe reef to explore. As you glide along, you’ll see vibrant corals, yellow and purple sea fans, arches, small caves, gullies, and of course colorful reef fish.

Another simpler yet equally beautiful settings are the bays between the barrier reef and the beach near Grace Bay, Water Cay, and Pine Cay. In these areas the depths are about 15 feet (5m) and there’s not much to see other than crystal-clear ocean water and the sandy ocean floor, yet there’s always a chance that Jojo the Dolphin might join in!

It’s important that riders have a minimum level of swimming competency and comfort in the water prior to attempting to subwing. If you’re not confident as a snorkeler, you may not be ready to subwing.

It’s also important that the water sport is overseen by an experienced and responsible captain who’s familiar with how the water sport works. Many boats have exposed props which are very dangerous, and tow-lines must be rigged correctly.

It’s tempting to want to closely glide over the reef, yet be aware that sudden obstacles can be encountered! It’s best to keep a safe distance from the coral! 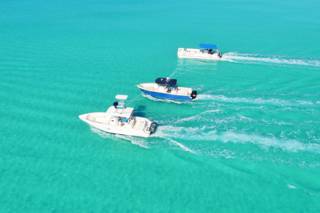 Talbot's Adventures
With decades of local knowledge, Talbot’s Adventures specializes in Turks and Caicos fishing charters, boating excursions, tours and water sports with a commitment to conservation.
Learn More
Last reviewed by an editor on 16 February 2021.