The Caribbean and Lucayan Archipelago is a spectacular place to tour via yacht or sailboat, and one of the best ways to reduce the chance of vessel problems when in the region is to conduct proper fueling planning. Fuel availability and quality varies greatly across the islands.

As a mid-way point between Florida and the southern Caribbean, the Turks and Caicos is an excellent place to refuel vessels as uncontaminated diesel and gasoline, in several grades, are reliably available. The island of Providenciales is home to most of the development in the Turks and Caicos, as well as nearly all marine fuel supply and services. All vessels are advised to refuel and resupply on Providenciales.

Fuel tanker at South Dock in the Turks and Caicos. Bulk diesel and gasoline is imported via shallow draft tankers. Fuels such as aviation fuel and REC 90 are transported in 20 foot tank containers.

Fuel quality, concerning both diesel and gasoline, should always be a primary consideration when fueling in the Caribbean and tropical Atlantic. Simply put: there’s a wide variance in water and debris contamination across the region, especially at outer island locations. To compound the issues, engine repair and services are also severely lacking, which makes avoidance of poor fuel quality the best strategy.

The age, design, and engineering of fuel storage tanks contributes greatly to its fuel quality. In the Turks and Caicos, most marinas feature relatively new tanks, as most upscale sites were constructed or refurbished in recent years, with careful planning going into fuel storage and distribution.

Another fuel quality consideration is the turnover. Sitting diesel and bunker fuel can experience microbial growth problems, which may lead to tank corrosion, and low sulfur diesels appear to be more susceptible to the condition. Gasoline decay can lead to poor fuel performance and ‘varnish’ accumulation.

Finally, it’s also important to look at quantities and methods of fuel offloading off of tanker ships for a given island or port. Sometimes, tanker offloading sites only use a single pipeline to offload multiple fuel types. As the fuel types and grades pumped though pipelines are changed, there will be quantities of mixed and contaminated output. The approach to dealing with the contaminated fuel varies, which may lead to one fuel types at the end use being mixed to varying degrees with other fuel(s). Sites that only use relatively small quantities or those looking to cut costs are more likely to have fuel mixture contamination.

One consideration, especially for vessels that may continue on to operate in Europe from a destination with fuel sulfur restrictions. Ultra-low-sulfur diesel (ULSD) is being required for inland vessel use at constantly increasing number of countries.

Unfortunately, there is very limited capacity for laboratory fuel and oil testing in the Caribbean and Turks and Caicos. When operating in the region, it may make sense to use a fuel test kit, especially in the case of vessels powered by advanced diesel engines.

Fuel Quality in the Turks and Caicos

Fuel storage at South Caicos. The island of Providenciales is the best place to fuel a vessel in the Turks and Caicos. Our outer islands may not have optimal availability or prices.

The Turks and Caicos has had a great reputation when it comes to fuel quality, both for marine and aviation. In fact, regional private aircraft arrival records have been set by the Turks and Caicos in the past, primarily due to the availability and quality of fuel.

Marinas in the Turks and Caicos typically provide either ultra-low sulfur diesel, or low sulfur diesel, depending on the site. Gasoline or petrol is typically ethanol-free in the larger marinas, yet some smaller sites only have typical automotive gasoline, which would contain ethanol. The upscale marinas in the Turks and Caicos usually have high quality and clean fuels.

When fuel is being purchased by the ton, every cent matters. Efforts are being made to allow for duty-free purchasing of fuel for vessels that will be departing the Turks and Caicos.

Bunker Fuel in the Turks and Caicos

For large vessels, fuel bunkering of vessels too large to enter local marinas can be arranged at the South Dock port on the island of Providenciales, typically via working with one of the yacht concierge services. High-quality ultra-low sulfur and low sulfur diesel can be delivered by truck. Bunker fuel oils A, B, and C, are generally not available for a one-time sale event. 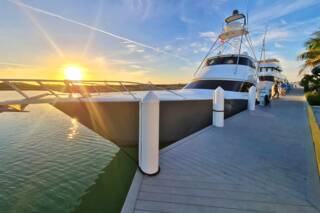 South Bank Marina
South Bank Marina is an upscale marina, port of entry, and vessel service and repair site that caters to yachts and recreational vessels. High quality fuel is available, as well as a wide range of repair, maintenance, and marine concierge services.
Learn More
Last reviewed by an editor on 10 June 2021.