South Caicos is a quiet island and home to the long-established Cockburn Harbour settlement. Development is generally contained near the southwestern side of the island, however, the more-recent resort and luxury residence projects have taken place on previously deserted beaches.

More so than the other settlements in the country, Cockburn Harbour is laid-out in a grid pattern, with paved and named streets. Cockburn Town on Grand Turk is similar, but is generally constrained to two parallel streets as opposed to the actual block grid of Cockburn Harbour. Despite an overall population loss since the 1960s, South Caicos remains the 3rd most populated island in the Turks and Caicos, after Providenciales and Grand Turk.

The Wilds and Landscapes

Increasingly beautiful to the north, the upper peninsula of South Caicos is largely untouched. The Bell Sound Nature Reserve occupies much of the western side of this peninsula, and at the far point, the long-abandoned U.S. Coast Guard LORAN Station can be seen, as well as spectacular views to the north over Plandon Cay, Middle Creek Cay, McCartney Cay, and East Caicos.

Almost the entirety of the center of South Caicos consists of shallow salinas. These saline marine ponds saw the construction of low stone dividing walls for the efficient evaporation of ocean water for sea salt production.

Remnants of windmill pumps, inlet channels, gates and the unique feature that is the Boiling Hole, are scattered over this expansive historical site.

On the eastern coast of South Caicos is the Highlands region. An incredible hiking destination, the only structure found here is the desolate ruins of the Highland Estate. Rolling limestone dunes, ocean cliffs, colorful reefs and the deep blue backdrop of the Turks Island Passage can be seen.

Several beautiful bays are hidden along the coasts adjacent to the Highlands. Often a bit too rough for swimming, these beaches are however quite good for beachcombing.

The newly-completed Sailrock resort and residential development, located on the north-eastern peninsula, features an eco-friendly design and is one of the major projects to occur on the island in recent years, along with the East Bay Resort.

The ruins of a Victorian-era warehouse in Cockburn Harbour. The limestone blocks here were originally about two feet thick.

Marine limestone presents in many different ways, and South Caicos is a great place to see this.

On the southeast point of the island (High Point) hard marine limestone can be found. As one progresses north up the east coast, this rapidly becomes softer until it reaches a state of almost being semi-lithified sand dune.

Karst Process features can be seen as well, although they’re far more common in the central and western Caicos Islands.

Quarried and hand cut limestone blocks were used in the construction of many buildings on the island, especially the projects of lesser-importance such as warehouses and residences. Predicting how limestone will respond to time and the elements is difficult, and many of the older buildings reflect this. In some cases the stone hardens, or it may soften and essentially disintegrate. In general, the clearer the stratification patterns (the pattern of the deposited organic calcareous material that became rock), the poorer quality the rock would be.

As was the case with many of the islands in country, South Caicos has seen significant terrain changes due to past human industries.

The greatest change to the island likely came from salt industry’s large scale reduction to the native plant life and tropical dry forest. This took place to reduce run-off and soil contamination, and in the belief that it would reduce rainfall.

A suggestion of what the landscapes and vegetation of South Caicos may have been is what’s exhibited on the neighboring island of East Caicos, which supports far denser vegetation on similar eastern facing coastlines. However, even East Caicos hasn’t remained untouched, as feral donkeys, descendants of animals used to pull rail carts for the guano and sisal industries, still roam the island. On both South and East Caicos, the donkeys have worn paths and trails across the island, have actively spread several types of thorns and prickly pear cacti, and have reduced the amount of grasses such as sea oats. 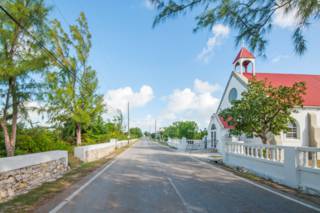 Cockburn Harbour
Cockburn Harbour is the primary settlement on South Caicos, and the center of most of the island's activity. The region is located on the southwestern coast and near a beautiful and sheltered natural anchorage. The area is home to the majority of the island's residents, shops, and services.
Learn More 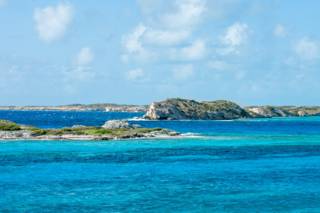