Travel authorization, insurance, and a COVID-19 test are no longer required for entry.

All visitors over the age of 18 must be vaccinated against COVID-19.

Aerial view of the airport.

The Providenciales International Airport is the primary airport in the Turks and Caicos. All scheduled international flights to the country land at this gateway.

The Providenciales Airport IATA code is PLS, the ICAO code is MBPV.

Most airlines recommend arriving at least 2 hours before international flights. For domestic flights, 45 minutes is sufficient.

The bulk of international passengers arrive 2 hours before departure. If you arrive 20-35 minutes before this, the lines will be significantly shorter.

You should give yourself additional time to check in on Saturday and Sunday. There is a high number of flights on these days and this can lead to delays in check-in and security.

An airport Fast Track concierge service is available at additional cost and allows guests to bypass the queues at Immigration and Customs on arrival, and check-in and security at departure. Several different Fast Track packages are offered, and prices start at $65 per person.

You'll need to clear immigration and collect your baggage before proceeding through customs. Unlike in some other Caribbean airports (such as Nassau), there are no pre-clearance facilities operated by the U.S. Customs and Border Protection for U.S. Nationals returning home.

Immigration clearance can be over an hour depending on the day and time of your arrival.

The Providenciales International Airport is a relatively small facility, and only has two baggage carousels. During typical conditions, there isn’t much of a wait for luggage, and customs is generally efficient as well.

There is one departure lounge each for international and domestic flights. The international lounge can become crowded at times, but plans are underway for expansion.

The check-in hall features an open-air design, and has both traditional check-in counters with staff, and automated kiosks for some of the major airlines.

Before the international security checkpoint, there are resin copies of the stones from the Sapodilla Bay Hill Rock Carvings.

The international departure lounge features two levels, and seating is found in both areas. The upper level also offers an outdoor viewing deck and limited amounts of seating, as well as a VIP and first class lounge.

The departure lounge is covered by a complimentary Flow Wi-Fi hot spot. Unfortunately, the connection doesn't always function, and is often poor when it is operational.

A restaurant, Gilly's Restaurant, is found outside the security checkpoint in the main terminal. Gilly's Café, a small bar which also serves food, is located in the upper level of the international departure lounge.

Several gift and souvenir, duty-free, and jewelry shops are located on the lower level of the departure lounge.

There is no Bureau de Change at the airport. You are advised to exchange currency before you arrive. Currency can be exchanged at local banks, but the fees are exorbitant and queues can be over an hour for service.

Taxis and cars (both private and rental) are the only forms of ground transportation from the airport.

Taxis are available directly outside the baggage claim area. We advise you to confirm your fare (total for all passengers) before setting off. There are fixed fares as set in the ordinance (and often posted by other information sources), but these are not always respected.

We recommend that most visitors rent a car because of the lack of public transportation. Find out more at Getting Around Providenciales, Providenciales Car Rentals, and Driving in the Turks and Caicos. See Providenciales Taxis for more information on taxis fares, stands and availability.

Some accommodations, such as vacation rental villas, offer complimentary airport pick-up and drop-off.

Transport from the Providenciales Airport to Grace Bay

Grace Bay is the home to the majority of resorts, hotels, and restaurants on Providenciales. This region of Providenciales is about a ten-minute journey by car from the airport.

In the case of visitors picking up a rental car at the airport (recommended), it’s not difficult finding Grace Bay. Simply follow Leeward Highway from the Downtown area to its conclusion at the Gateway to Grace Bay roundabout, and follow the short Allegro Road to the center of Grace Bay.

Taxi fares for two people typically cost $28-34. Be aware that taxis may multiply the fare by the number of passengers, and we advise clarifying the total rate for your party before embarking. 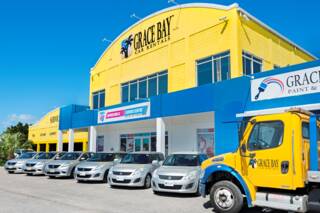 Grace Bay Car Rentals
Grace Bay Car Rentals has one of the largest fleets in the Turks and Caicos, with a wide selection of car, minivan, SUV and 4x4 options. Delivery or pickup from your accommodation or the airport included. The main Grace Bay office is located within easy walking distance of most resorts on the island.
Learn More 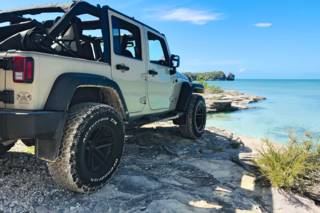 Island Life Jeeps
Explore Providenciales by Jeep Wrangler! Our premium and modern soft top jeeps are the perfect complement to a vacation in the Turks and Caicos. Discover beautiful and secluded beaches. Personal, friendly, and professional service.
Learn More 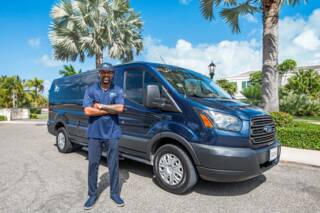 Parking fees are on par with major international airports such as London Heathrow and Miami International Airport. It is illegal to leave cars unattended at the curbside.

The small car park is located a short distance from the terminal, which does become full at times. As usual, don't leave any valuables in your car as there isn't security personnel at the car park.

The Providenciales Airport Authority has recently begun the practice of towing and clamping improperly-parked vehicles. We advise against leaving a car unattended for any length of time outside of the car park.

Flight information is provided by Airportia.

Flight information is provided by Airportia.

Renovations and a New Terminal

As of July 2022, plans are now progressing to make major improvements to the current Providenciales International Airport and terminal, as well as concurrently building a new terminal to the west of the current location.

The Turks and Caicos government is working with ALG Consulting, a Canadian firm that specializes in logistics, infrastructure, and transportation, to create a workable strategy in the short term to reduce congestion issues and improve the air passenger experience, while building a new and much larger terminal that can serve the forecasted needs of the Turks and Caicos for at least 30 years.

Current projections are that around 300 million dollars will be spent on improvements to the existing airport and the new terminal.

Several improvements are expected to be made to the current terminal and runway, with goals of finishing much of the following in 2023:

The primary goal of the Providenciales International Airport Expansion Project is to build a new and modern terminal, with a goal of completing the terminal in 2027. The new terminal is expected to have four sky bridges to service large aircraft, and bus service between the terminal and aircraft to service smaller aircraft, domestic flights, and large international aircraft that can’t be accommodated by the sky bridges.

Private Aircraft and Fixed Base Operators

For information on traveling by private plane, see Turks and Caicos FBOs and Private Planes.

There are two FBOs on Providenciales, and these full service facilities cater to luxury and commercial aviation.