Getting to Salt Cay

Preparing a Piper Aztec PA23 for a flight to Salt Cay.

Salt Cay has several scheduled flights a week from Providenciales and Grand Turk. Salt Cay is part of the Turks Islands group, and is located about 80 miles (129 km) east of Providenciales. Due to this distance, passenger ferries between Salt Cay and Providenciales are unfeasible.

If you're staying overnight on Salt Cay, you may want to spend a day or two on Providenciales before continuing on to Salt Cay for ease of domestic flight connections, and to allow for a visit to one of the local grocery stores for supplies. If you're visiting to scuba dive, consider visiting the excellent dive sites near Providenciales as well.

Salt Cay doesn’t have a large selection of shops, and the few island businesses only carry a limited range of staples and dry goods. Consider stocking up on any non-basic supplies, food, and drinks before traveling to Salt Cay. See Salt Cay Shopping and Providenciales Grocery Stores and Supermarkets.

For information on connecting through Providenciales, check out the Getting to Providenciales page. You'll find passports and visas requirements (citizens of the United States, Canada and United Kingdom don't need a visa), flight information, local connections, and more.

Getting to Salt Cay by Air

The easiest way to get to Salt Cay is via plane. Currently, both local Turks and Caicos airlines, Caicos Express Airways and interCaribbean, operate routes between Providenciales and Grand Turk. Be warned that cargo space may be limited as small Piper Aztecs and de Havilland Twin Otters are the typical aircraft of choice.

Cost is around $160 per person round trip from Providenciales (2022 airfare), although discounts may be able to be arranged for large groups.

Salt Cay Airport (SLX) is a small one terminal, one runway airport.

Getting to Salt Cay by Ferry from Grand Turk

The Salt Cay Ferry typically runs Tuesday, Wednesday and Friday. It departs from Salt Cay, so it’s not suitable for a day trip from Grand Turk to Salt Cay. However, it is viable for day trips from Salt Cay to Grand Turk.

The ferry lands at Deane's Dock on Salt Cay. Return tickets are $15 for adults, children are free. 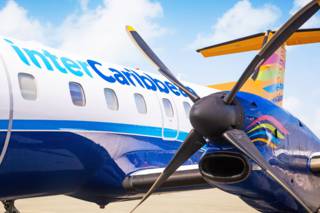 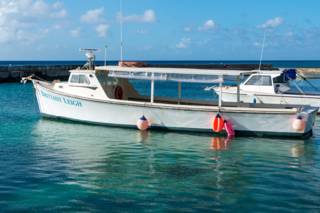 Salt Cay Community Ferry
This ferry service is scheduled for three days per week and runs on Tuesday, Wednesday and Friday. It travels between Deane’s Dock on Salt Cay and South Dock on Grand Turk. Travel time is about one hour.
Learn More