Most phones will work in the Turks and Caicos without difficulty. Depending on your mobile operator, you may need to activate international roaming before you depart. GSM coverage is provided by the two local telecommunications companies (Flow and Digicel), and Flow provides coverage for CDMA (Verizon and Sprint phones).

You have the option to buy a local prepaid SIM if you're mostly interested in data access and local calls.

Decide if you want to roam or buy a local SIM. If you're roaming, contact your provider to set up international roaming. Sometimes it's enabled by default, but not always.

You'll need an unlocked GSM phone to buy a local SIM card. Many new GSM phones are quadband (which means they use all 4 GSM frequencies: 850, 900, 1800, 1900). If you only have a dual-band or tri-band phone, choose the appropriate local provider.

Neither local carrier supports using an eSIM. Digicel has announced plans to support eSIMs in early 2023.

Dialing from the Turks and Caicos to a foreign number requires the full international area code.

The top-level domain (TLD) for the Turks and Caicos Islands is .tc.

Digicel offers free internet and data for limited Facebook use. If you connect through the app, or by visiting the m.facebook.com site, you'll be presented with an option to connect free (videos and external links are not included). It's recommended that you read and understand the privacy concerns, as certain usage data will be shared with the network (Digicel), and your profile picture, name and other information may be used automatically in adverts on 3rd party websites. 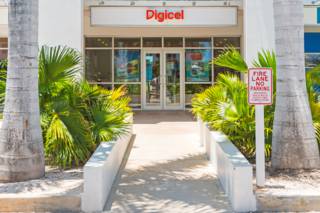 Digicel
Digicel is one of the two major provider of mobile phone services in the Turks and Caicos. Their main retail headquarters offers mobile phones and prepaid and post-paid SIMs. The store is located at the Graceway Plaza on Leeward Highway in central Providenciales.
Learn More 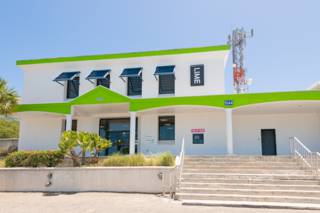 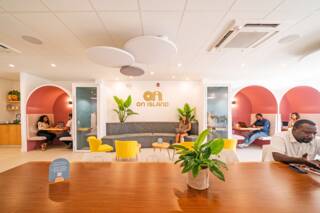 On Island
A fresh environment to focus, On Island is the first coworking space in Grace Bay, Providenciales, Turks and Caicos. Comfortable like working from home, but without all the distractions, On Island is a shared space for quiet, productive work in the day transforming into a community event space in the evening.
Learn More

Older Phones, Electronics and Equipment such as Cell-Range Extenders

The GSM standard uses 4 main frequencies: 850 MHz, 900 MHz, 1800 MHz and 1900 MHz. New phones are usually quad-band, which means they work on all frequencies. Older phones are typically dual-band or tri-band. Many other types of electronics, such as cell-range extenders, usually only work on two frequencies.

Flow uses the 850 MHz and 1900 MHz frequency, while Digicel uses 900 MHz and 1800 MHz. If you have an older phone or specialty equipment, make sure you select the right operator if you're buying a local SIM card.

Beginning in early 2018, Digicel began installation of fiber to the home (FTTH) throughout the islands of Providenciales and Grand Turk. The first customers were connected in June 2018 and roll-out continues.

All local fixed line services are provided by Flow (formerly Cable and Wireless), and use the prefixes 941-XXXX and 946-XXXX. The remaining number prefixes are cellular services.