Potcake is the common name for the island dogs found in the Turks and Caicos and Bahamas.

Potcakes are not endemic or native to the Turks and Caicos and greater Bahamian archipelago, and were rather introduced by early settlers and sailors, as pets and for pest control. These dogs can be traced to several origin breeds, yet have a heavy terrier influence, and may even claim some ancestry from the small barkless hunting dogs that the pre-Columbian Lucayan peoples once had.

It’s common to spot packs or single feral Potcakes on many of the islands in the Turks and Caicos, including Providenciales, Grand Turk, North Caicos, Middle Caicos, and South Caicos.

Potcakes are very hardy, friendly, loyal, and respond moderately well to training. They’re considered a mid-sized dog, typically weighing 40-65 pounds (18-30 kg) as adults, with smooth short coats that may be a variety of colors, including black, brown, white, reddish, cream, yellow, and variations of the preceding hues.

Where do Potcakes Get Their Name?

A Turks and Caicos Potcake.

The origin of the name “Potcake” is quite simple, and ties into the meager economy that our islands and the nearby Bahamas had in the past. Before food imports were commonplace, locally sourced seafood, maize, beans, okra, and sweet potatoes were the core of most Turks and Caicos food, and these ingredients were often transformed into stews, soups, and souses, which were cooked in large pots. After the cooking process was finished, there was typically a layer of burnt and congealed material left in the bottom of the pot, and this “potcake” traditionally became the fare of the dogs.

Is the Potcake an Identifiable Breed?

We like to think it is! The answer to this question also depends on who you ask. As of now, the American Kennel Club hasn’t recognized the Potcake as a specific breed, yet the dogs meet all basic criteria to be recognized as their own breed.

Traditional Potcake dogs tend to not be aggressive, even when feral and in packs. However, feral dogs will often have an influence of more than the traditional Potcake. In many Caribbean islands, large guard-style dogs such as rottweilers and pit bulls are popular for the security and image they provide, and these larger dogs sometime breed with feral local dogs, resulting in more aggressive offspring.

Historically in the Turks and Caicos, nearly all dog attacks on people have been committed by pets owned by irresponsible owners, and local laws that are meant to curb dangerous pet behavior are unfortunately rarely enforced by the government.

The best place to see and interact with Potcake puppies is Potcake Place, located at the Saltmills Plaza in central Grace Bay. This non-profit charity cares for rescue dogs, and attempts to find new homes for unwanted Potcakes, both in the Turks and Caicos and abroad.

Part of what makes Potcake Place such a well-known attraction in the Turks and Caicos is that they encourage guests to take puppies out for two-hour socialization walks on nearby Grace Bay Beach. During peak times, there can be more demand than there are puppies. Puppies are available on a first come, first served basis, so you’ll want to arrive early at such times!

Potcake Place has the main goal of getting stay dogs a safe home, so they are able to help with the adoption process transport to other countries. 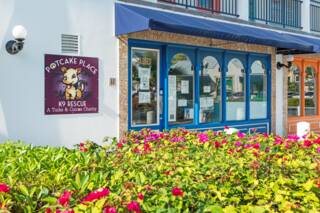 Potcake Place
Potcake Place is a dog rescue charity located at the Saltmills Plaza in Grace Bay. The non-profit's mission is to find caring homes for stray dogs, and they welcome visitors and locals alike to take puppies out for socialization walks.
Learn More