Bougainvillea shrubs and palms at Sunshine Nursery in the Turks and Caicos.

The island of Providenciales is home to several landscaping and nursery companies, ranging from one man operations to commercial landscaping companies and extensive propagation nurseries.

Sunshine Nursery, located in Grace Bay and operating for more than 30 years, is by far the largest nursery and garden center in the Turks and Caicos, and raises an impressive range of endemic and imported plants. Their shop offers a wide collection of tools, fertilizers and soil amendments, decorative pots and fixtures, and of course flora of all types.

Outside of large resort projects, landscape architecture in the Turks and Caicos is often an afterthought, and the long term results are typically apparent at many villas and homes in the islands. It makes sense to carefully design your landscaping.

Screening top soil for landscaping in the Turks and Caicos.

Maintenance is a foremost consideration, especially in the case of pools, gutters, roofs, car parking, and environments that are conducive and inviting to certain types of fauna. Trees such as neem, casuarina, and tropical almond continually drop seeds and leaves or needles, which dictates relentless cleaning of certain features. Many introduced plants also require constant irrigation, which suggest additional infrastructure such as gray water cisterns and plumbing systems independent of the main water system.

The Turks and Caicos has some beautiful and globally-rare endemic plants that are excellent choices for landscaping, yet unfortunately, many developers and homeowners default to using faster growing and more colorful introduced flora.

The bougainvillea is a very popular choice in the Turks and Caicos for hedges and shrubs, and their bright flowers may be pink, purple, peach, white, orange, and other colors.

For residential landscaping, a compromise that should be considered is to identify, protect, and incorporate both established trees and transplantable orchids, bromeliads, and cactuses. Several types of endemic plants and trees are raised in local nurseries for landscaping and can be easily purchased, including the buccaneer palm, Turks head cacti, and silver buttonwood.

One of the finest trees endemic in the Turks and Caicos is the Sacred Lignum Vitae (Guaiacum sanctum), a smaller and slow growing tree that is beautiful, hardy, highly resistant to pests and disease, and is considered near threatened due to habitat loss. In the wild, the tree’s reputation for slow growth is certainly deserved, which in dry terrains can essentially be stagnant Bonsai-like growth, yet can be drastically increased when there’s sufficient water and fertilizer. Once or twice per year, Lignum Vitae will produce large numbers of small purple-blue flowers, and areas with densities of the trees can be quite beautiful.

Ancient Lignum Vitae are common at many historical sites in the Turks and Caicos, with many present trees dating back to when the sites were operating. It’s obvious the species was valued in the past for its presence, medicinal values, and for its wood, which is one of the hardest and heaviest in the world, and has self-lubricating properties that were utilized for bearings, intricate workings, and marine fittings, with famous applications including being used for gears in John Harrison's historic 1740s chronometer, and the rudder bearings in the USS Constitution (Old Ironsides).

Lignum Vitae trees can be heavily pruned without repercussion, and if knocked over in storms, respond very well to being propped back up if most major roots are not broken.

The Turks and Caicos is home to several types of endemic and globally rare orchids, all of which are hardy, drought resistant, and beautiful. It’s highly advisable to scout construction sites before clearing takes place and rescue any orchids, as they are easily transplantable.

The Turks and Caicos tropical dry forests also support a few different types of bromeliads, and these air plants transplant with almost no effort, and add bright rainforest ambiance to landscaping.

Silver buttonwood is an excellent landscaping tree and plant, and can be cultivated into hedges, bushes, and trees that can reach heights of more than forty feet (12 meters). Low salinity wet environments are optimal for silver buttonwoods, yet they survive droughts moderately well.

Our endemic variety of mahogany, known as West Indian mahogany or American mahogany, is an excellent landscaping tree, and is found in areas that are not dry and have lower levels of salinity.

Due to logging in the past, there are not many large examples in the wild in the Turks and Caicos, yet the tree can reach impressive stature.

Gumbo limbo, also known as copperwood and tourist tree amongst many other names, is a common softwood local tree that’s excellent for landscaping. When watered sufficiently it grows very rapidly, and can be pruned easily. The tree’s branches break easily, which allows it withstand hurricanes well, after which it recovers fast.

The two weaknesses of Gumbo Limbo trees in the Turks and Caicos are black sooty mold infestations typically caused by a symbiosis of ants and aphids that leads to sap leakage and mold growth, and in larger examples, trunk rot caused by flooding. The first issue is usually easily treated by systemic insecticide, the second issue typically results in the tree’s death. In interior and low salinity areas, a lack of large gumbo limbo trees is indicative of areas where there may be periodic flooding and standing water for a few days.

The Turks and Caicos has several types of rare and endangered tropical hardwood, many of which are beautiful and should be preserved whenever possible. Examples include Nakedwood (Thouinia discolor), Princewood (Extosema caribaeum), and Jamaican caper (Capparis cynophallophora).

Raising carrots, beans, and peas in the Turks and Caicos.

There are many types of Introduced ornamental trees in the islands, many of which thrive. Examples include many types of palms, the Norfolk island pine, yellow elder, neem, corktree, mahoe, tropical almond, and royal poinciana.

If planting plantains, mangos, and citrus trees, it’s highly advisable to ensure proper selection of tree variety, as there can be significant differences in fruit quality between popular cultivars and hybrids and the many locally-available seeds and saplings, which tend to not be optimal varieties. There’s a parallel situation with coconut palms, as leading nurseries supply coconut palms resistant to lethal yellowing disease, unlike the established varieties.

The Turks and Caicos doesn’t have many large trees, and correspondingly doesn’t have many skilled and equipped arborists! The largest trees that typically have to be pruned or felled are invasive casuarinas (also known as sheoak or Australian pine), which are typically found on sandy coastlines. Casuarinas are typically left on their own and don’t require pruning, unless they interfere with views, development, or landscaping. Local attempts to cut large casuarinas are often unprofessional, dangerous, and comical. Casuarina cuts easily when green, yet hardens significantly as it dries, to the point of causing rapid wear and overheating of blades and chains.

Our various endemic trees respond quite differently to pruning. Lignum Vitae, West Indian mahogany, Gumbo Limbo, sea grape, and Bahama strongback can all be heavily pruned with little consequence, which allows the trees to be cultivated either as trees with a canopy or as bushes.

Wild tamarind, joewood, marblewood, nakedwood, Jamaican caper, and princewood, all beautiful trees that warrant saving, can be carefully pruned, yet heavy cutting will stun the trees, make them susceptible to pests, and may even kill them.

When raising flora in the Turks and Caicos, both for agriculture and landscaping, a major consideration are pests and disease. Due to the limited climate change across the seasons, and the introduction of diseases via imported landscaping and food materials, many threats are well established.

The best strategy regarding flora diseases is simply to select plants that are resistant to the diseases that are present in the Turks and Caicos. Most endemic trees are resistant, as are some introduced plants such as Corktree, neem, hibiscus, plumbago, casuarina, and royal Poinciana. 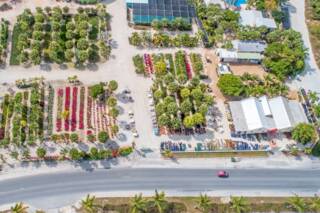 Sunshine Nursery
Sunshine Nursery is a propagation nursery, landscaping supply, and garden center business, located at Grace Bay on the island of Providenciales. The nursery raises and supplies a very wide range of both imported and endemic flora, including mature palms. The shop also stocks decorative ceramic pots, tools, irrigation supplies, fertilizers, and more.
Learn More
Last reviewed by an editor on 16 February 2021.