Currently, all public electricity generation is run by Fortis TCI, a vertically integrated company which provides both power generation and distribution. Electricity is generated almost exclusively via diesel generator, and solar and renewable energy account for less than 1% of power consumed in the Turks and Caicos (2018 data). Current generation capacity is 92 MW across the country (2018 data).

Solar-derived power is increasing in popularity, with many private installations visible throughout the country. Several local companies specialize in both supply and installation of alternative energy systems.

History of Electricity Generation in the Turks and Caicos

In 1987, the Provo Power Company (P.P.C. Limited) acquired a 50-year exclusive license to generate and distribute electricity for Providenciales, North Caicos and Middle Caicos, which expires in 2037. Separately, Atlantic Equipment and Power (AEP) acquired an exclusive license for South Caicos which is due to expire in 2036.

For the Turks Islands of Grand Turk and Salt Cay, electricity generation was run by Turks and Caicos Utilities (TCU), a government-owned entity.

Fortis Turks and Caicos (FTCI), a subsidiary of Canadian utility holding-company Fortis Inc., acquired P.P.C and AEP in 2006, and concluded an acquisition of TCU in 2012.

Electricity is priced via two components: ‘Electric’ which includes generation and distribution, and ‘Fuel Factor’ which varies based on global fuel prices. Rate changes apart from the fuel factor require approval by Government.

Fortis TCI announced in 2017 that 1 MW of solar capacity is scheduled to be installed in the islands via the utility company, which would include a 700 kW array on North Caicos and 300 kW throughout the other islands.

There are two approaches for persons wishing to install a solar array at their residence or business:

For persons interested in participating in C.O.R.E or U.O.R.E, it is highly recommended to contact Fortis TCI in advance of planning and construction. Applications will take 4-12 weeks to process.

Alternatively, homeowners and business can install their own solar array, inverters, and storage/battery system isolated from the public electric grid.

Photovoltaic (solar) panels and some support equipment carry a 0% duty, unlike the normal 30% on most items imported into the islands. However, a 7.5% Customs Processing Fee (CPF) is payable.

There are no other direct Government subsidies or incentives. As there is no income or corporation tax in the country, there are no tax credits.

Hurricanes are the largest threat to the integrity and life of a solar array in the Turks and Caicos. Panels are commonly manufactured to withstand 140 MPH winds. The main consideration for mitigating and preventing hurricane damage is the attachment method.

In the aftermath of Hurricanes Irma and Maria in the U.S. Virgin Islands, the Federal Emergency Management Agency (FEMA) published an April 2018 report. This noted that certain clamping methods, such as clamping panels to each other instead of independently, resulted in adjoining panels shifting when a single panel broke free, and possibly increasing panel loss and damage. Furthermore, the report highlighted a number of recommendations, including that clamps be checked annually for tightness as clamps loosened on their own.

On days with cloud cover, photovoltaic panels will produce around 10-25% of their rated output. Unfortunately, this is often correlated with hurricanes and other adverse weather conditions which may affect the grid – thus the conditions which may cause blackouts may also reduce the effectiveness of your solar installation.

This is especially important with an independent system not connected to the grid, as you may quickly deplete your batteries.

The payback period will likely be between 8-12 years, although this depends on a number of factors.

Due to decreasing global costs of solar components, and a lack of a Turks and Caicos centric study, it’s difficult to judge the payback period for the TCI.

A 2017 report by the National Renewable Energy Laboratory (NREL), part of the U.S. Department of Energy, found an average benchmark price of $3.22 per installed watt of solar energy (AC watt, taking into account conversion from DC).

Note: These figures are estimates only, and are calculated from U.S. installation costs and TCI electric prices. These calculations are for general guidance only and should not be used for decision making. Components and installation will likely be higher than U.S. costs, due to a 7.5% import fee (CPF) and lack of any direct subsidies (as exists in some U.S. states). A discount rate of 3.5% is used. The buy and sell price per kWh is based on July 2018 data.

For those participating in C.O.R.E, the payback period would be around 9.7 years (with an annual 3.5% discount rate), depending on inflation, capital cost, variances in fuel prices, and other factors.

Offsetting the purchase price from Fortis TCI may seem lucrative, however this doesn’t factor in battery storage costs, which have shorter lifespans compared to PV panels. Implementing a battery system, which would require sheltered indoor space, would decrease the profitability of such a system.

Adding a battery system will add a significant initial cost. For example, adding 27 kWh of capacity utilizing two Tesla Powerwalls would cost an estimated $12,500 (data from Tesla, August 2018 and for U.S. customers). This would bring the cost of a 6 kW installed system, with battery backup, to $31,820. Provided that you use all power generated via the system, this would offset the purchase of power costing $4,427.28 per year. Payback would be in around 8.4 years (using a 3.5% annual discount rate), depending on a number of factors.

Important: These figures assume an equal lifespan of batteries and panels, which is not the case. Battery lifespan will vary based on a number of conditions, including usage patterns, temperature and humidity. Installing your own system will give you electricity backup in the event of grid outages, but will come at increased space requirements (sheltered indoor space), initial cost, and complexity. Depending on the lifespan of batteries, the overall cost may be higher than participating in C.O.R.E.

A number of factors affect the efficiency of solar panels across locations. For example, PV panels located at higher altitudes receive more solar radiation and thus produce more power (all other things being equal). Atmospheric conditions, such as average cloud cover, also significantly impact the total output of a panel for a particular region.

The following table contains data from Global Solar Atlas. PVOUT is an estimated annual output of 1 kWp installed capacity (kWp is a standardized calculation and is the kilowatt 'peak' of a panel). GHI is Global Horizontal Irradiance and is equal to the total amount of shortwave radiation received on a horizontal surface on the ground. Diffused Horizontal Irradiance, or DIF, refers to the part of the solar irradiation scattered by the atmosphere. 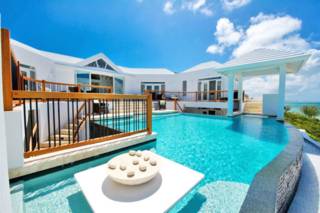 RA Shaw Designs
R.A. Shaw Designs in an award-winning single-source architecture and contracting firm based on Providenciales, Turks and Caicos. The agency’s portfolio of work includes an impressive collection of luxury villas and residences.
Learn More

Building a Home
Location Guide
Architects and Designers
Last reviewed by an editor on 19 October 2020.